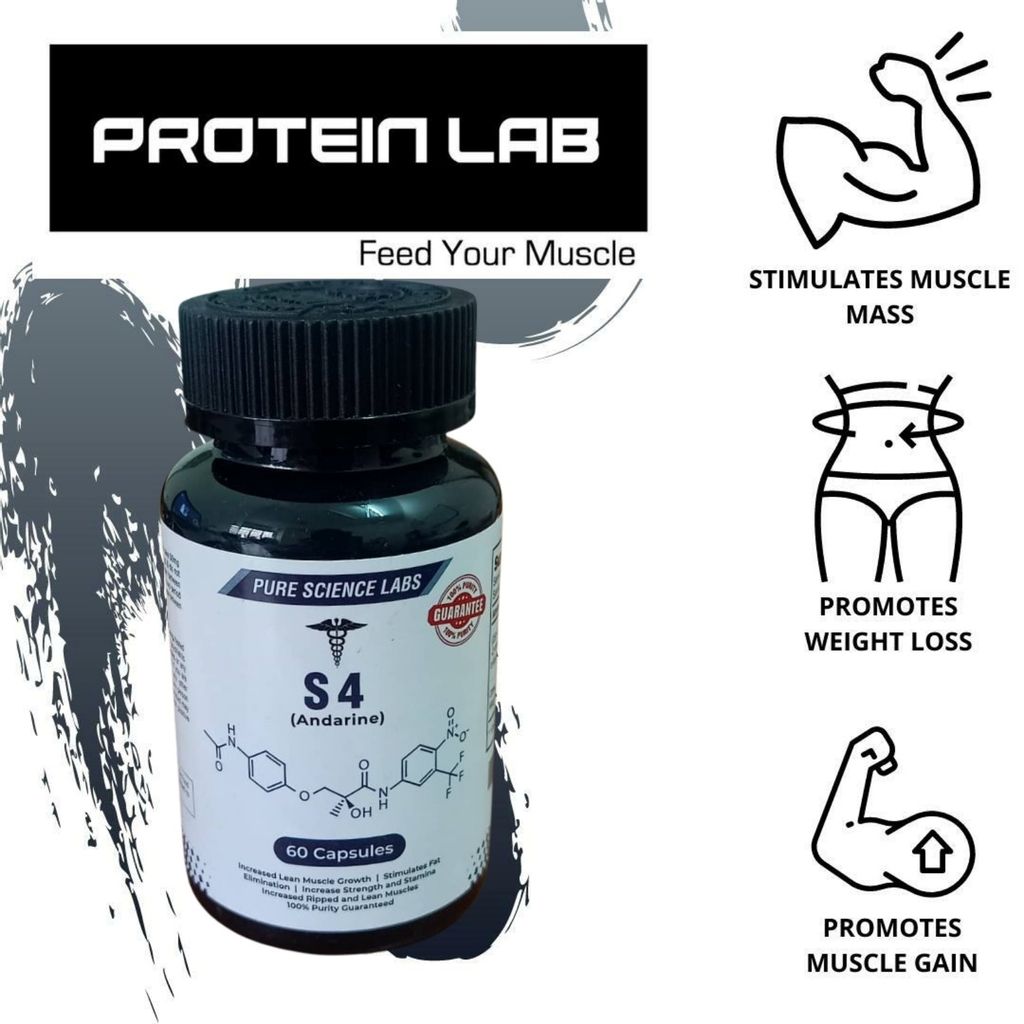 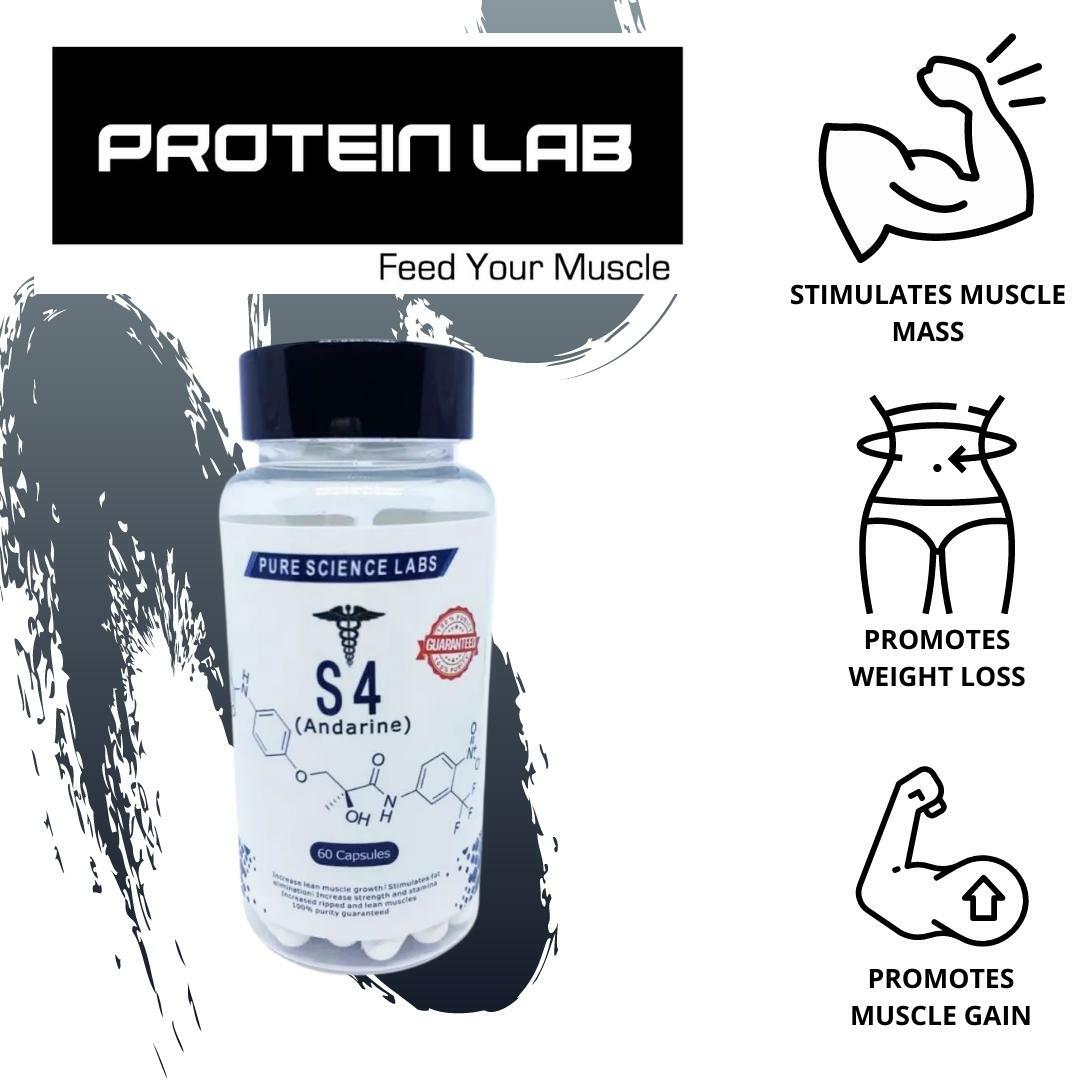 All you need to know about S4 (Andarine)

S4 (Andarine) or Acetamidoxolutamide, is a SARMs (Selective androgen receptor modulators). S4 is said to be the most potent SARM which helps sustain lean muscle mass while stimulating fat elimination at the same time. Today, we’ll take a closer look at everything there is to know about S4.

To start, let’s describe what a SARM does. There is three types of chemicals that act on the androgen receptor (AR). One is the AR antagonist, which is a chemical that binds to the receptor to prevent it from activating. The second is an AR agonist, which binds to the receptor and detaches, then binds again, over and over. An example of an AR agonist is testosterone, each time the AR is bonded with testosterone, a signal is sent out to activate a particular set of genes. The more testosterone that is in the system, the more AR binding will occur. The third is an AR modulator, or basically a molecule that attaches to an AR and changes its structure to react however it wants.

To sustain/gain lean muscle mass while stimulating fat elimination at the same time.

A SARM such as S-4 is a good example. S-4 attaches to the AR and sticks to it; each time the AR interacts with testosterone, S-4 forces it to produce genes that exclusively benefit the muscle and bone growth. In other words, S4 is a form of SARM that attaches to the androgen receptor (AR) the same as regular androgens, the only variation is that S4 generates selective anabolic activity.

As said earlier, SARMS function by tying to the AR resulting in an anabolic activity. Due to this fastening and stimulation, more protein is produced which allows muscle building. S4 can trigger muscle development in the same way as steroids, but minus the same unwanted side effects, the latter has on the prostate and other sexual organs.

S4 is a SARM with utmost androgenic effects as it is around 33% of the strength of testosterone when attaching to AR. S-4 also increases the amount of muscle mass produced by desensitizing the AR to the individual’s natural testosterone to influence a stronger effect.

S-4 is by far the most versatile SARM ever created. Not only is it the first SARM approved for a stage 2 research study, but it has also become the most analyzed and investigated SARM so far. After the discovery of its anabolic potential, the primary purpose of S-4 aimed to develop an alternative treatment for age-related muscle wasting, osteoporosis, and similar symptoms of hypogonadism, or end-stage renal disease.

Aside from preserving lean body mass, S4 can also help improve it. From a stage 1 study, S-4 has provided evidence of a 3.3 lbs increase in less than 90 days with no increases in exercise or change in daily diet. An unintended side effect (or benefit if you will) is the decrease in body fat [Chen et al., 2005; Gao et al., 2005; Kearbey et al., 2007]. Decreases in body fat are dependent on the person’s genetics, but they will definitely have strong effects on the body’s ability to oxidize fatty tissue. S-4 was found to not only have a great affinity (potency in binding to androgen receptors), but also present greater anabolic effects than some traditional steroids [Kearbey et al., 2007].

Aside from its muscle-building advantages, S4 won’t cause liver damage, can prevent gynecomastia (enlarged breasts in men), and can help boost your overall health.

History and Development of S4

The idea for S-4 didn’t start out as many belief. It wasn’t an attempt to create a safer version of steroids or any of that nonsense people use to sell anabolics. S-4 started out as a new development for male contraceptives and showed some promising effects. There had been decreases in spermatogenesis and an increase in male libido. So for those of you who have had trouble getting your wife pregnant while on sarms…you’re welcome.

It wasn’t until researchers discovered how this first generation SARM affected castrated lab mice by not only increasing the production of muscle mass and calcium for bone density but was also completely selective in its tissue growth. As studies continued, many of these research trials resulted in astonishing outcomes creating a benchmark for even more research.

One study in particular compared S-4 to DHT (a common anabolic steroid); the results have shown that S-4 exceeded DHT in producing lean muscle mass over the course of 120 days with only 3mg per day. S-4 has also shown no side effects on prostate growth, testosterone shut down, or any negative side effects caused by traditional anabolic steroids [Kearbey et al., 2007]. Another study identified that S-4 is completely absorbed even at very low doses. The half-life for S-4 is between 2.6 to 5.3 hours. Most people have opted to split their 50mg to 75mg doses into 3 separate doses, one with every meal. This has become somewhat of a dogma but there are now studies proving that it is any more effective than one solid dose once a day [Chen et al., 2005a; Gao et al., 2004; Gao et al., 2005; Kearbey et al., 2007; Kearbey et al., 2004].

Once more, an early study done on S-4 provided proof of full muscle regeneration in volunteers with degenerative disorders without the use of exercise and the minimum dosage of 3mg/kg/day. Changes can be seen anywhere from 1-2 weeks. This was the very first study that classified S-4 as CLINICALLY SIGNIFICANT by improving skeletal muscle strength, lean body mass, and a reduction in body fat [Chen et al., 2005; Gao et al., 2005; Kearbey et al., 2007]. Unfortunately, there are always some side effects that arise when using Because S-4 is a ligand by definition, the side effects will never be permanent even at supraphysiological dosages and can be easily avoided through proper dosing.

How Andarine is used will depend on the kind of results you want. Here are the general guidelines…

The recommended dose for cutting is 50 mg for 6-8 weeks. You should use it every day and then take 2 days off for the duration. Taking S4 daily for the length of the cycle can lead to changes in eyesight.

For Cutting (best use of S4)

Andarine’s properties are very alike to steroids Anavar and Winstrol, the only difference is that S4 can better provide lean muscle gains. In fact, there have been many cases of bodybuilders gaining up to 3 pounds of lean muscle while on a caloric deficit! S4 displays the same binding resemblance to AR, hence presenting similar fat-burning effects. S4 can also minimize LPL (lipoprotein lipase) – an enzyme that causes lipid accumulation and plays a role in storing adipose tissue (excess body fat). The AR oxidizes this adipose tissue and uses it as its preferred energy source, allowing the body to decrease excess fat at an amazing rate.

It also improves vascularity for that “aesthetic” chiseled look with minimal to no water retention. Unlike steroids, it won’t affect your joints but reinforce muscle mass and power instead. You can also say goodbye to painful pumps.

*Take 2 days off when taking S4 (repeat the cycle after the 2-day break) to avoid vision side effects.

Use S4 with a more anabolic SARM such as Ostarine for better recomp results as you’re aiming to gain muscle while losing fat. Recommended intake is 50-75 mg for 4 to 8 weeks.

S-4 isn’t the SARM that comes to mind when we think “BULKING”, but its properties in muscle gain shouldn’t be overlooked. During the holiday season, many people take advantage of the excess food and snacks available and jump on some well-known bulking SARMs such as LGD4033. While there isn’t an enormous 15 lb leap in the muscle like these “bulk specific” products, S4 can provide relatively large muscle gains and utilize these excess calories to provide an extra 8-10 lbs in muscle while also keeping the body relatively lean. This steady increase in muscle mass can limit the amount of work one needs to do for a leaner summer body.

The Benefits of S4 over Steroids

Unfortunately, S4 isn’t the perfect anabolic chemical and does come with some downsides. The first and possibly the most disappointing is that it follows the law of diminishing returns. Unlike anabolic steroids, SARMs will become continuously less effective after a certain milligram percentage. For the average person, it ranges from 50mg to 75mg. There are people that can go above this range for even more amazing results or need to stay below this range because they are unable to tolerate the chemical. About 99.5% of the population should fall within the 50mg to 75mg range.

The most popular negative effects of S-4 are visual issues such as the yellow tint and difficulty adjusting to night vision. These side effects are unique to S-4 and are sometimes overblown. If these side effects present themselves, simply stop taking S-4 for two days and stay at a 5-day on/2-day off cycle. THESE EFFECTS ARE NOT PERMANENT! Once a ligand (such as a SARM) leaves the system, its effects disappear completely.

Lastly, S-4 and most other SARMs have been known to cause depression in a small population of people. This has been discovered as more of a psychological issue than a physiological issue. researchers with mice suffering from any emotional disorders need to be cautious when using this chemical.