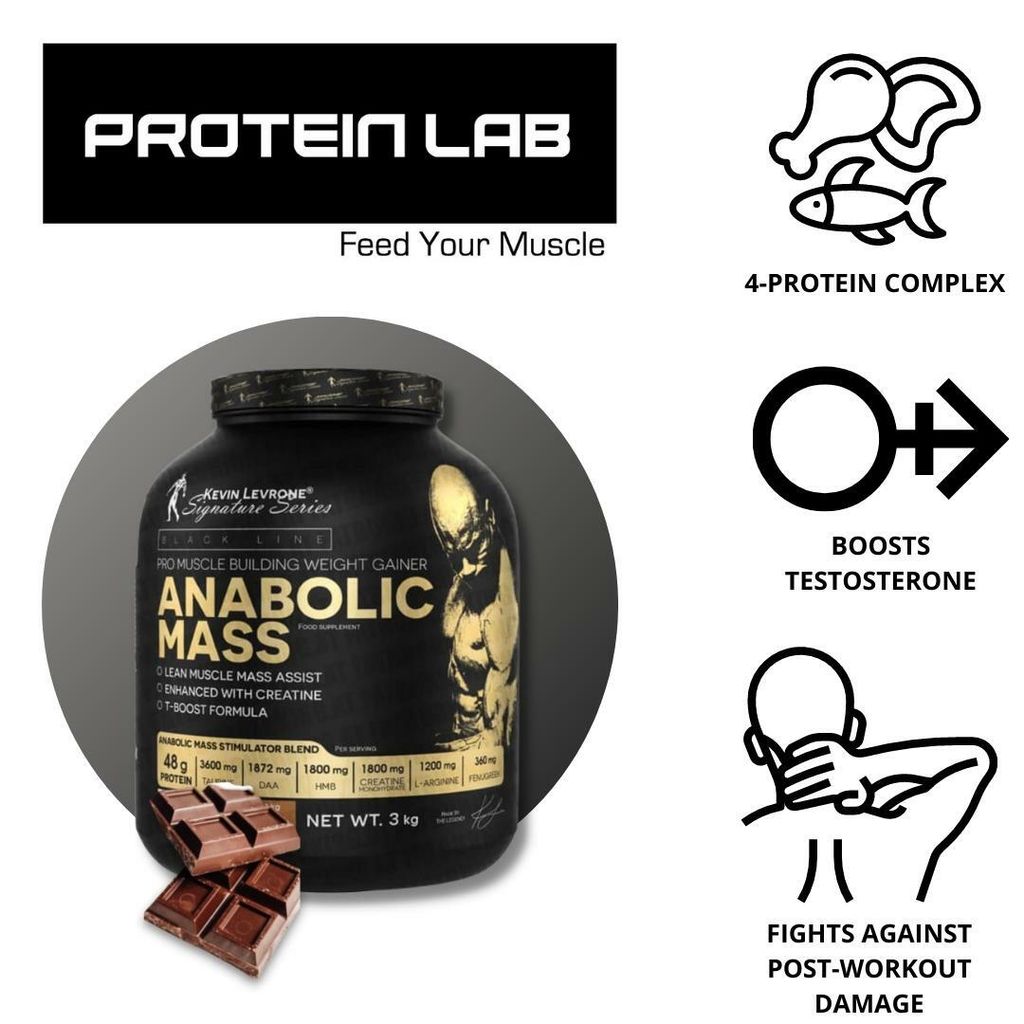 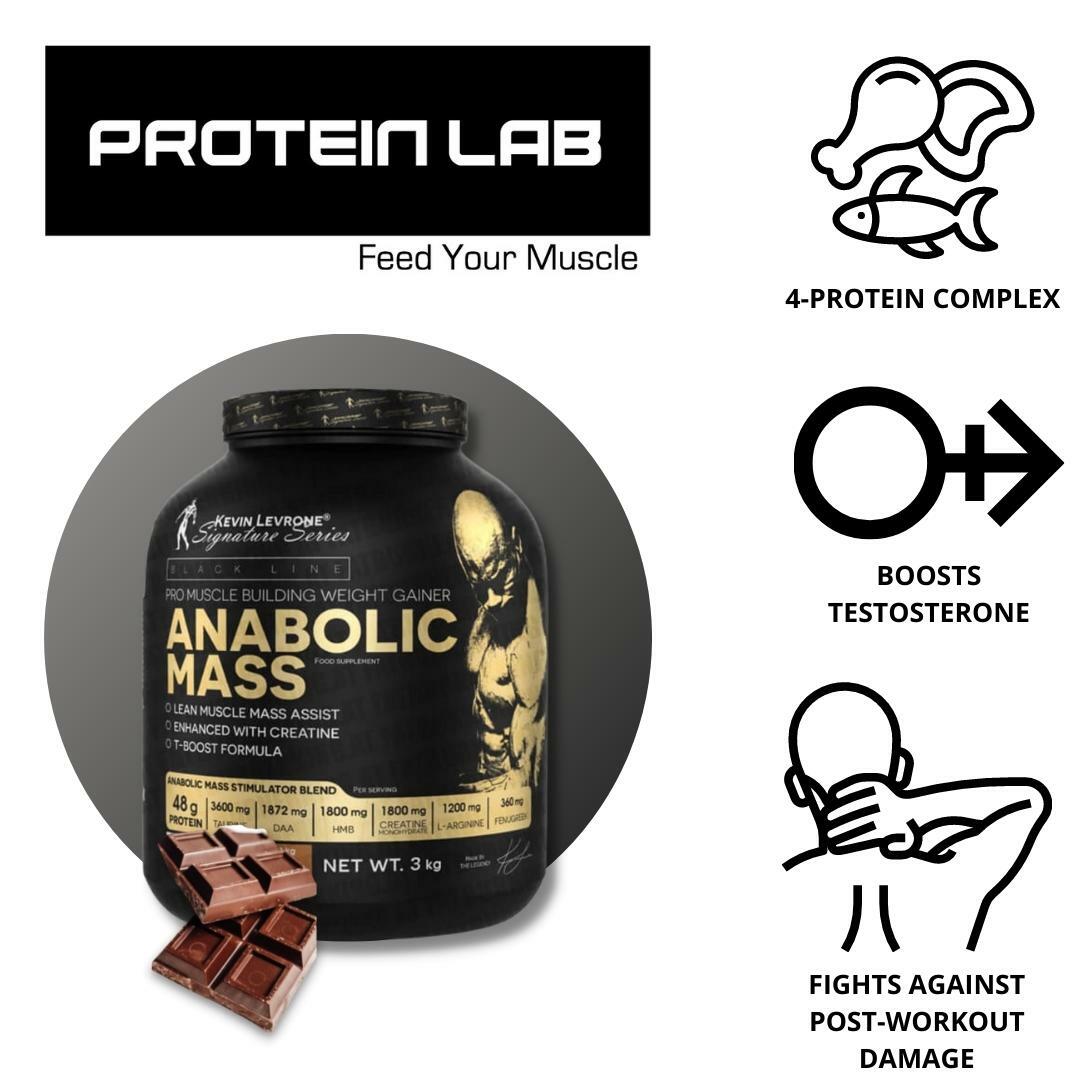 The Advanced ANABOLIC MASS is the one true choice for any athlete, scientiﬁcally formulated to add size during bulk phases and recommended for individuals who want to break through their strength training barriers!

ANABOLIC MASS it’s not designed for those who ﬁnish last! It’s designed for the alpha, the individuals who are always focused on success and drive towards their goals. Size does matter and we know that you are looking to Gain. That’s why we have created ANABOLIC MASS – the superior formula, enhanced with proven anabolic drivers and test boosters for rapid mass gain and strength!

With every serving of this powerful anabolic formula, you will fuel your body with 48 g of Protein Complex and 54 g of Carbohydrate Complex making this Premium Mass Gainer standalone.
Four different protein sources are included in Protein Complex: 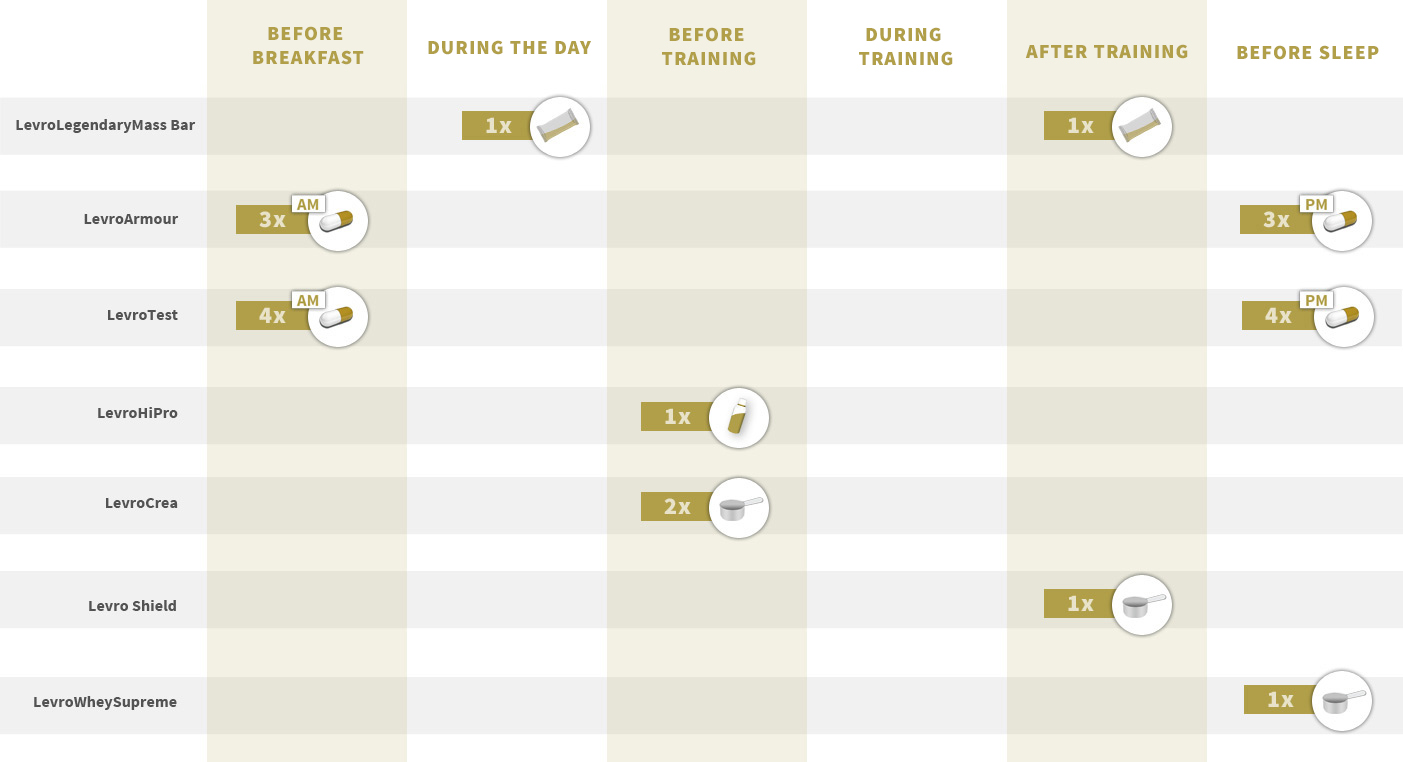 A whey protein concentrate WPC is the most universal protein in terms of the time of application and duration of absorption.  It needs a slightly longer time for its absolute digestion which is 2-3 hours and a slightly longer time to start the digestion process which is about 30 minutes after consumption. It is the basic building material for your muscles that protects the anabolic processes in your body.

ISOLA
A whey protein isolates WPI, which is a whey protein fraction subjected to micro and ultrafiltration, which allows for obtaining the highest degree of protein concentration in a product (over 90%).  It has the highest content of branched-chain amino acids BCAA which is not less than 25 g per 100 g!  Moreover, it does not contain any carbohydrates and fats.  Combined with Optipep®, it influences the enhanced insulin response of the human body after its consumption. Whey isolate, just like whey hydrolysate is a fraction that should be consumed right after waking up or immediately after the workout due to its rapid absorbability. Both fractions, WPI and WPH complement each other where the time of absorption and the whey aminogram of the highest bioavailability is of the basic importance.  Due to the quick absorbability of WPI and its insulin secretion stimulating effect, the whey isolate can transform in the body into glycogen lost during a heavy workout, this reaction can take place especially when there is a deficit of carbohydrates.

OPTIPEP
A primarily enzymatically digested whey protein in the form of di and tripeptides containing protein in the amount of 90 g per 100 g.  The hydrolysis process of whey isolate takes place as the primary digestion of the isolated protein which does not require any further “fragmenting” into free amino acids by our body, in order to absorb them.  Due to this fact, that fraction remains in the small intestine for a very short time, absorbing immediately. It minimizes the risk of an allergic reaction after consuming WPH. Optipep® together with the whey isolate shows the highest absorbability of all protein fractions available on the market.  WPH is also characterized by a high content of the necessary branch-chained amino acids BCAA, ca. 20 g per 100 g of product.  As confirmed by the scientific research Optipep®, apart from its immediate absorbability (amino acids appear 10 min after the consumption) enhances the insulin response of the body which can be used for the transport of other active compounds to the muscles. The enhanced insulin response after the consumption of Optipep® remarkably improves the speed of regeneration due to the correlation of the insulin effect upon the fast reconstruction of muscle glycogen at the coexisting appropriate dose of carbohydrates.  In comparison to normal whey, the level of insulin is up to 43% higher in the bloodstream within 3 hours after consuming Optipep®. This allows for improving the absorbability of the hydrolysate itself as of the other active ingredients which are supplied to our body within that time.  What does it mean?  More building material and a bigger number of active ingredients such as creatinine (if you are during the cycle), carbohydrates will be supplied to your muscles! For this reason, this fraction is recommended especially for people with diabetes, of course following a medical consultation.  The most important property of the whey isolate hydrolysate, which Optipep® is, is its quickest absorbability and the highest bioavailability.  This fraction is best for consumption in the morning on an empty stomach and right away after the workout when a quick resynthesizing of protein is most significant for immediate minimizing of the catabolic condition.

PEPTOPRO
PeptoPro® is a patented form of hydrolyzed casein from milk.  Presently, it is one of the most recent protein fractions on the supplements market, characterized by very high quality, quick absorption, and an aminogram typical for casein.  PeptoPro® is a patented and proprietary formula in which enzymes have been used which allowed to clear the product of the sour taste characteristic of hydrolyzed products. This allows producing proteins with a better taste. Additionally, by means of the enzymatic hydrolysis a product has been obtained which has a very high level of hydrolysis, which contains di and tripeptides, and moreover, which is short of lactose and fats and is, at the same time, very well soluble even in cold water. Di and tripeptides, due to their low molecular structure, can be absorbed quickly and delivered directly to the working muscles already a few minutes after consumption.  As far as the absorption time is concerned, the whey isolate and hydrolysate have a boosting effect thus offering a quite different amino acid balance.

D-ASPARTIC ACID (DAA)
D-aspartic acid is an amino acid that, as opposed to all protein-building amino acids is in D form and not in L. Naturally, protein amino acids exist in L form but as a result of the conversion in the body they can change into D form. DAA has won its popularity as an amino acid influencing the natural production of testosterone and, as such, it is present in anabolic products. In the studies* conducted on a group of men it has been found that consuming 3120 mg of DAA in the morning causes the highest growth rate of testosterone secretion after 12 days of supplementation with this ingredient. Taking the above facts into account it is recommended to consume DAA on a cyclical basis. A 3-day break should be made after 12 days and, afterward, DAA can be reintroduced into supplementation.

TAURINE
Taurine is a non-protein sulfur amino acid commonly occurring in animal tissues. Taurine is mainly distributed in skeletal muscle, heart, brain, and retina. The taurine may be synthesized in course of the internal transformations in the body from cysteine and methionine, but its dispensable origin does not satisfy the body’s demand for amino acids. Thus, it must be obtained with diet. Due to its structure (sulfonic group, not carboxyl group) taurine does not form peptide bonds and occurs in the body in a free form. Taurine has numerous physiological functions. It regulates calcium concentration in the body. Taurine is a neurotransmitter and neuromodulator and it is responsible for osmoregulation. It is also involved in the formation of bile acids and modulates the course of inflammatory reactions. Taurine shows antioxidative properties by protecting the muscle cells against the harmful effect of free radicals, which come into being after high intensity and long-term aerobic (requiring oxygen) exercises1. This amino acid also boosts the transportation of active elements to the muscles by modulating the effect of insulin. It gives a pleasant feeling of “being energized” without the effect of irritation or “overstimulation” of the central nervous system. It also has antioxidative properties, protecting the muscles from the effects of free radicals, that is, the “oxidative stress” occurring after high intensity and long-term physical effort.
1Taurine and its potential therapeutic application Konrad Szymański, Katarzyna Winiarska, Zakład Regulacji Metabolizmu, Instytut Biochemii, Wydział Biologii, Uniwersytet Warszawski

HMB
HMB (short for β-Hydroxy β-Methyl butyrate) is a metabolite of the amino acid Leucine that, along with KIC (α keto-isocaproate) and isovaleryl-CoA, mediate the effects of leucine. Approximately 5% of dietary leucine is oxidized into HMB, and HMB appears to be the main metabolite of leucine that more effectively prevents the breakdown of muscle protein.
When compared to leucine, HMB appears to be significantly more potent on a gram per gram basis at attenuating the rate of muscle protein breakdown but is less effective than leucine at inducing muscle protein synthesis. Due to this, HMB is marketed as an anti-catabolic agent (purposed to reduce the rate of muscle breakdown) rather than an anabolic agent (purposed to increase muscle mass).
HMB, currently, appears to be a pretty interesting supplement for the purpose of reducing muscle wasting during periods where muscle atrophy is accelerated (cachexia, AIDS, bedrest) and should theoretically work in athletes on a calorie-restricted diet but is not fully established for this role yet (which is a notable issue, since Glutamine has a large dichotomy between clinical and healthy populations).

CREATINE MONOHYDRATE
Creatine monohydrate is one of the best-known diet supplements for sportsmen all over the world with scientifically proven effects.  In physiological conditions the human body produces creatine by itself from 3 amino acids: arginine, glycine, and methionine which is further transformed into phosphocreatine which, in turn, is responsible for producing ATP, the quickest accessible source of energy for intensively working muscles.

ARGININE
Arginine is known by sports enthusiasts as a molecule that triggers the “muscle pump” – inseparably related to the production and release of nitric oxide molecules in the body. Nitric oxide is an important cellular signalizing molecule involved in many physiological and pathogenic processes. It is a powerful vasodilator boosting the endothelium relaxation which results in widening the diameter of all blood vessels, mainly arteries. A wider artery may carry more blood and nutrients to the working muscles. The arterial blood contains oxygen necessary for muscle work and supplies nutrients such as amino acids, saccharides, creatine, and arginine from outside. Nitric oxide makes the transport within the body more efficient, and thus the cells receive nutrients but also the harmful metabolic products are more quickly removed from the cells.

ORNITHINE
L-Ornithine is a nonprotein amino acid (not used to create proteins) that is an intermediate of the urea cycle, and the provision of ornithine to a cell is actually the rate-limiting step of the cycle. Ornithine binds with a molecule known as carbamoyl phosphate which requires ammonia to be produced and then is converted into L-Citrulline giving off urea as a by-product. Due to this, the conversion is one that reduces ammonia concentrations in the blood and concomitantly increases urea.

L-Ornithine is thought to be important for conditions that are characterized by an excess level of ammonia, and this is mainly focused on either hepatic encephalopathy (clinical liver condition) or prolonged cardiovascular exercise. A reduction in serum ammonia has been repeatedly found in persons with hepatic encephalopathy (most studies use infusions, although it appears to apply to high dose oral supplements as well) while there are only two studies assessing exercise; the one that was better suited to assess the influence of ammonia (using prolonged exercise rather than acute exercise) did find an anti-fatigue effect.

FENUGREEK EXTRACT
It is a plant extract increasing the anabolic condition of the body. Steroidal saponins of fenugreek are the precursors in the synthesis of hormones having an anabolic effect, moreover, they increase the retention of nitrogen in the system, thus stimulating the synthesis of proteins. This substance is acting in a similar way to insulin, lowering sugar levels in the blood.  The insulin properties of fenugreek literally pump in the active ingredients from the bloodstream into the muscle tissue. Fenugreek preparations also have nutritional and anti-inflammatory properties. 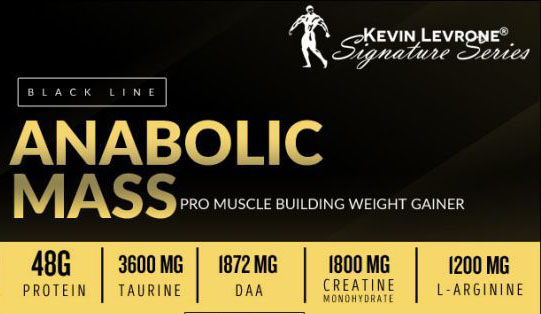