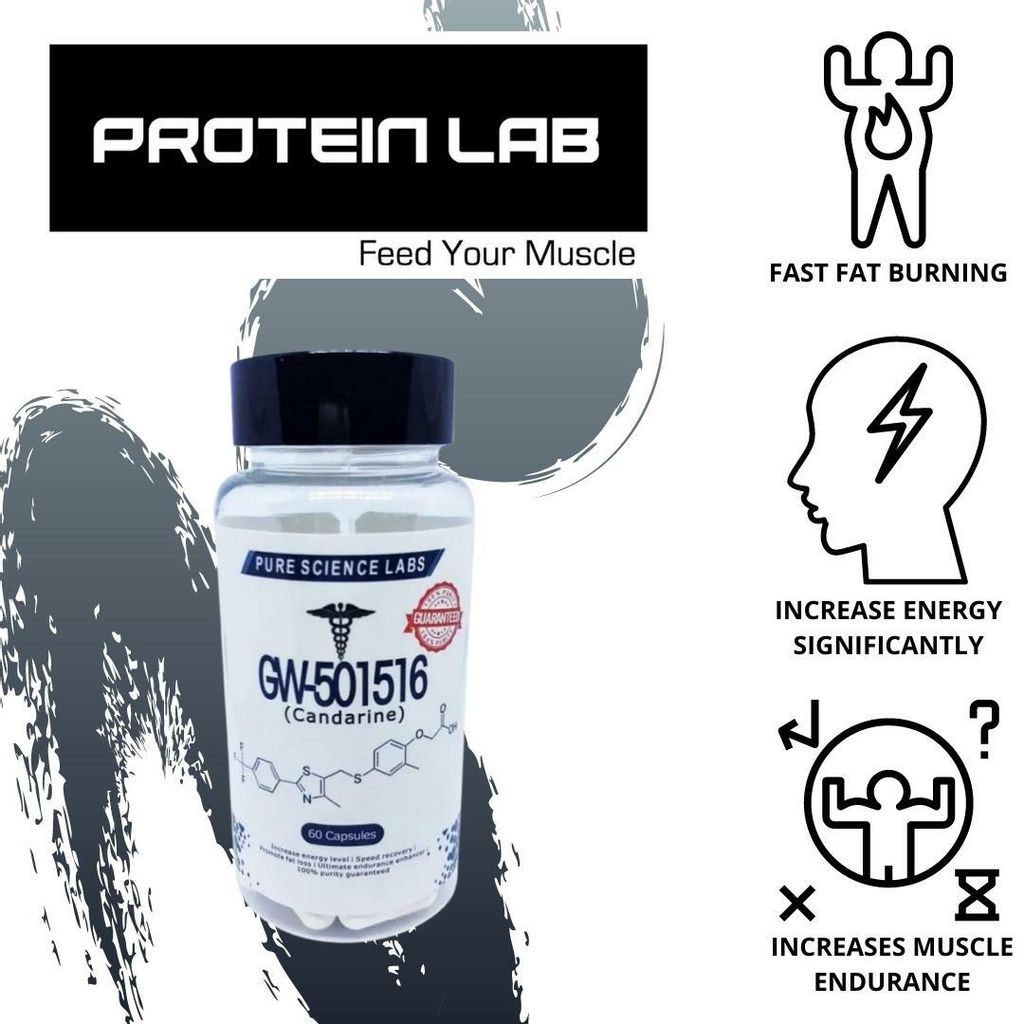 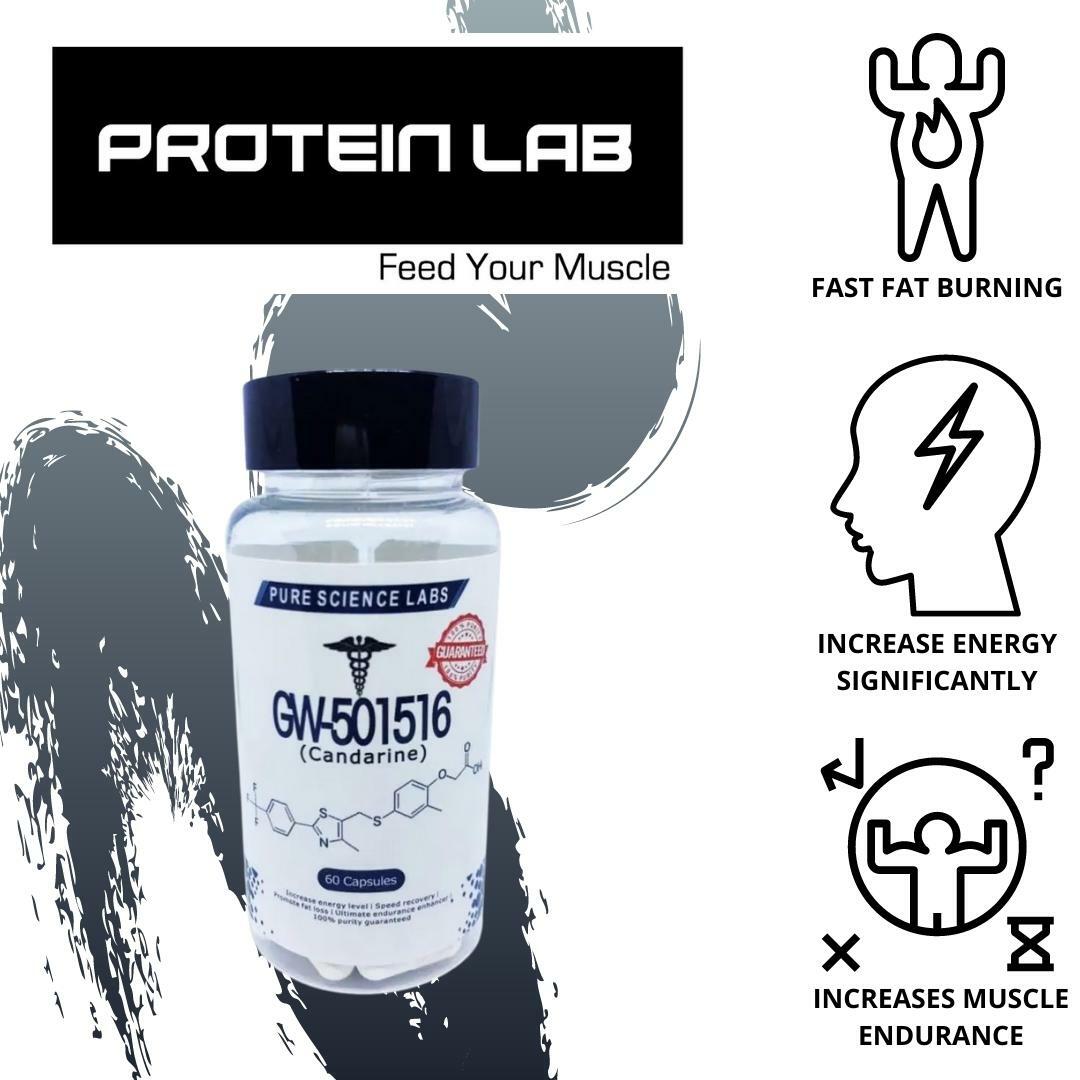 GW-501516 is suitable to increase muscle endurance and ensure longer-lasting performance during training. However, the function of GW-501516 is actually more to burn fat fast without burning the muscle that has been gained. GW-501516 contains some elements of anabolic, where it is also able to improve muscle size. GW-501516 has NO catabolic elements. GW-501516 users will often absorb nutrition better and be able to reduce the rate of carbohydrate and fat in the muscle tissue, due to glucose levels absorption in the bones as a form of energy.

Cardarine was primarily developed to treat obesity, diabetes, lipid strain, and heart health problems. As a matter of fact, those who run blood-related work will notice that cardarine will magically aid with lipid strain, and their cholesterol levels will improve substantially.

GW 501516 (or Cardarine) supplement, is a research chemical developed in the 1990s to prevent and cure tumor formation in the colon, prostate, and breasts. Studies done in the early 2000s have found that GW 501516 and other PPAR agonists have also been able to stop metabolic disorders such as obesity and diabetes through specific gene expressions.

As research continued to grow, bodybuilders quickly caught on to GW 501516, calling it “the ultimate endurance enhancing supplement.”

Plus, The SARMS Cardarine’s ability to burn off excess fatty tissue, enhance recovery, and dramatically increase endurance has made this product a staple in every athlete’s cycle and PCT. With no harmful side effects found in the past 20 years, no wonder why GW 501516 has become a legend in the world of sports and athleticism.

GW 501516 is is a PPARδ agonist and NOT a SARM, but does work in very similar ways. In this case, GW501516 targets the androgen receptors that stimulate glucose uptake and skeletal muscle tissue. Currently, it is being suggested as a potential treatment for obesity by rapidly melting through what’s called “fatty acid oxidation“.

Also, Cardarine is said to increase HDL by an average of 79% (good cholesterol) and decrease LDL (bad cholesterol) in current Phase II trials.

These help increase your HDL levels from an enhanced expression of the cholesterol transporter.

The benefits of Cardarine seem to be endless, both in medical science and in the gym. Many studies have been done on GW 501516 showing numerous positive effects during the trial, despite minimum side effects.

That is part of the reason why Cardarine supplementation in Malaysia has recently become so popular.

GW 501516 is literally the best it gets when it comes to endurance, energy, stamina, and performance enhancement of any kind.

It is used by elite athletes for a reason, from cyclists to elite bodybuilders. In fact, WADA has even added GW 501516 to its list of banned substances because of its competitive advantage.

You can expect insane levels of intensity in the gym, shorter recovery times, and be able to bust through plateaus like never before.

Also, the energy you get from Cardarine is not experienced as jittery or anxious. It’s not a stimulant, and you won’t crash hours later.

In fact, many users after taking this supplement even report feeling an overall sense of well-being and calmness.

Some of the other benefits include:

Cardarine: The Cure for Obesity?

THE PRIMARY ROLE is GW’s ability to rid the body of unwanted fatty tissue and it has become almost LEGENDARY. The chemical compounds in this particular PPAR agonist function in the differentiation of adipocytes.

Much like growth hormone, GW501516 generates proinflammatory markers in adipose tissue and decreases the activity of genes involved in lipogenesis. This means that the body is able to block fatty acid chains from forming and being stored as fat.

A study from Scientific Reports published in 2015 stated:

“GW501516 acts on PPAR beta cells that exclusively use body fat as energy in the same way the body would when going through “starvation mode”.

The study is quoted stating: “physiological and pathophysiological functions of PPAR and generated novel strategies to treat metabolic diseases”.

The activation of these particular genes in the body has been seen to burn body fat at such an alarming rate that it is being coined “the cure to obesity”.

There were absolutely no adverse side effects detected in the last 20 years of study and it was extremely rare to see muscle wasting at any point during the research.

The 2015 study by Wei Chen, Ph.D., and his colleagues have also found that dramatic increases in the PPAR gene in slow-twitch muscle fibers increase oxygen usage and greatly increase endurance. The enhanced endurance was seen in lab mice with a normal oxygen supply and those with oxygen restrictions which provided significant evidence that GW501516 targets and enhances skeletal muscle endurance and recovery time to a supraphysiological level.

A study titled “A metabolomic study of the PPARδ agonist GW501516 for enhancing running endurance in Kunming mice” stated that BCAA were spared during trials of intense exercise which allowed the mice to have a greater rate of recovery in muscle tissue and neurotransmitters.

These rats had even lost weight while maintaining a high-fat diet, suggesting it could potentially prevent obesity and help manage weight regardless of diet or lifestyle.

Not to say that there are none, but in the last 20 years no side effects have been seen by anyone studying the drug.

GW501516 has not only been tested in healthy subjects, but also in those with simulated “real life” habits (such as drinking alcohol, stimulant narcotics, and the use of tobacco products). It is uncertain if there are long-term ramifications, but no research has been published stating otherwise.

This is what makes Cardarine so incredibly popular and usable over long periods of time. In certain studies, there have even been signs showing the reversal of diabetes, obesity, Dyslipidemia, and many other diseases.

In contrast to popular belief, GW501516 doesn’t promote damage to liver cells. The chemical has actually been known to promote healthy liver function and faster healing properties to the skin and muscle tissue. In essence, you will not heal rapidly like Wolverine from the X-Men movies, but you will shorten your recovery time from scratches, blisters, and injured muscles by a significant amount.

There have been many forum comments expressing concerns about GW501516 and its relationship to cancer and tumor development. The hypothesis for this controversy stems from GW’s ability to improve Angiogenesis in the body at an extremely high rate and the rate of cancer growth in the colons of lab mice.

This is a common occurrence among endurance athletes and children going through adolescence. Scientists had speculated that if there were tumor cells active in the body, they would be especially susceptible to angiogenesis and cause the tumor to grow at a much faster rate. Since 2004 many experiments have been done to prove this hypothesis, but so far, all of them have been largely unsuccessful.

A study published in 2004 by the American Association of Cancer Research stated that PPAR agonists have:

…Shown to have no effect on the proliferation of colorectal cancer cells and “…under normal culture conditions, PPAR activation has no effect on cell growth”.

Keep in mind that this study was done in rats given amounts of 400 mg a day and was abused and ran for hundreds of weeks to top it all off. Time and time again this study has been refuted and shown to be deeply flawed and inaccurate.

In a 2008 experiment done on human breast cancer and colon cancer cells, not only did the PPAR agonist GW 501516 prove to be safe for use, it has proven to inhibit cancer cell growth. The National Institute of Health has confirmed without a reasonable doubt that GW 501516 inhibits a multitude of cancers in human cells.

Over a decade of research studies on human PPAR beta (the primary target of GW) has only proven a decrease in cancer cells with extended use (up to two years). The confusion for these previous allegations of cancer growth was from results published in 1996 and have long since been abandoned due to new clinical research. The chemical compound has been dosed in human PPAR for a number of years and has only provided positive results on cancer treatments, liver function, and metabolic efficiency.

In all of the human studies done so far, there were no noticeable side effects at all while running GW.

Check out some of the studies and resources on GW 501516 for more info:

To buy  GW 501516 in Malaysia, you really have to be careful since a lot of these companies will sell you just about anything, falsely advertising it as GW or SARMs. The supplement market in Malaysia itself is saturated with fake products. Thus Proteinlab Malaysia not only wants to ensure you get original authentic supplements but also SARMs.

There has also been a recent ban on SARMs in the USA and Malaysia which has forced most of the most trusted distributors to shut down their operations. Thus the import of original authentic SARMs in Malaysia has become extremely difficult.

Its formula is based on months of research and is hailed to be the strongest, purest GW 501516 in the Malaysian market. It’s the only place I’ll use.

Stacking Cardarine means running it in combination with other compounds. What makes Cardarine stand out is it can be used with almost anything (cutting, bulking, or coming).

The most common way to use Cardarine supplementation in Malaysia is in a triple stack involving LGD 4033 and MK 2866. You’ll have all the gains, endurance, fat loss, and size gains by taking all three.

After a lot of research and personal use, there is nothing I can recommend more than Cardarine. It is the king of all fat burners and reigning champion of endurance supplements. GW 501516 has received many rave reviews from its users. One user even said “…GW is probably the closest thing in research to perfect supplement formula. Stamina and fat loss are unreal!…” There’s no doubt this is the Clenbuterol of PPARs.

It’s true that most athletes and professional bodybuilders simply lack the endurance and cardio levels to get the results they want. With GW, you can actually add lean mass while reducing body fat…something you can’t do taking anything else. You’ll be able to lift longer and harder, and with an intensity never known to you before. This obviously is what it takes to get results and get them fast.

What are your thoughts on Cardarine? Have you tried GW 501516? Tell us by leaving your comments